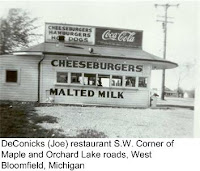 Main Street, Cool Cities, Walkable Neighborhoods, Livable Communities. These are buzzwords for the current trends in urban planning and the types of communities that are attracting people today, especially our youth. The phrases refer to a return in city planning that emphasizes thriving town centers. The Charter Township of West Bloomfield has been debating the issue of a development plan that will encourage the creation of a town center beginning at the intersection of Orchard Lake and Maple roads. It is interesting to understand how the township developed without a town center in the first place and the significance of the Orchard Lake and Maple road intersection.

Charles Martinez, author of Song of the Heron: Reflections on the History of West Bloomfield (ISBN: 0-9753764-0-3), identifies five reasons why the township developed without a town center. The first reason was the lack of a major American Indian trail. Although early surveyors identified paths through the township, these were just connectors to larger trails like the Saginaw or Grand River. Secondly, although 20% of the township’s area was covered with water, this resource was never harnessed in such a way as to generate power for a thriving mill operation. The third reason is that the few local sawmills and gristmills that could have been the impetus for a town center quickly failed. At the same time, the mills in Franklin, Pontiac, Farmington, and Commerce had already developed and West Bloomfield farmers were already making use of their goods and services. Finally, the early leaders of West Bloomfield Township were farmers and not merchants or individuals of great political prestige.

We must consider two additional and more contemporary developments that affected the Township’s commercial development. First, the geographic definition of West Bloomfield Township includes the cities of Orchard Lake, Keego Harbor, and Sylvan Lake as well as the Charter Township of West Bloomfield. In this context, Keego Harbor could arguably be considered the closest semblance to a town center within the boundaries of the township. However, beginning with Orchard Lake in 1928, the residents of the northeast corner of the township split to create their own city governments including separate police and fire departments.

The second contemporary change was the unfortunate demise of the Interurban rail line running along Orchard lake Road. The web of public transportation that is so prevalent in thriving cities today could have been carried out by this small trolley connecting the Township to larger rail lines in Pontiac. Eleanor Pekkala, writing her memoirs for the Township’s Michigan Sesquicentennial committee, mentioned the impact of the Interurban and the development of the Maple Road stop, "The area called 'St. John's Crossing' by the interurban people is now becoming the commercial center of the township. St. John's Crossing was the Maple Road stop which was so named because six farms adjoining this area were all owned by Johns: John Watt, John Case, John Beattie, John Voorheis, and John DeConick."

When making decisions for moving forward it matters to have an understanding of the past. Our planning for town centers must consider the roles that location and transportation played in the development of existing pockets of commercial development. These existing pockets must be fertilized with the elements of growth that the general public is expecting to find in its choice for residency.

The Song of the Heron and Eleanor Pekkala's Early Development of West Bloomfield - An Overview, are available through the Greater West Bloomfield Historical Society (GWBHS). The Society is a non-profit, tax-exempt organization. It serves the Michigan communities of Keego Harbor, Orchard Lake, Sylvan Lake and West Bloomfield. The Society's goal is to provide a vital museum to familiarize residents with our area's history.
For more information, please visit www.gwbhs.com
Posted by Buzz Brown at 5:58 AM No comments:

History Matters: What do I need to live on Apple Island? 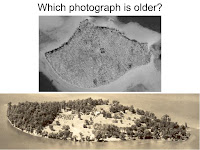 I am fortunate to live within the boundaries of a Michigan public school district that owns an island! The island has become a valuable tool for facilitating a discussion about sustainability in an historical context.

Which island is older?

One of the annual services performed by our local historical society is to conduct tours of Apple Island for 2nd-grade students in the West Bloomfield School District, the island’s owner. As an introduction I enjoy showing the students two black and white aerial photographs of Apple Island in the center of Orchard Lake. I ask the question, “Which photograph is older?” Students scan the first photograph and see an undeveloped island full of trees. They study the second photograph showing an island in which two thirds of the land is cleared, houses are standing and even a fruit orchard can be seen. Of course they assume the latter is the most recent. I have in fact tricked them. The first photograph is actually a Google satellite photo converted to grey scales (otherwise they assume color translates to new). The second photograph was taken sometime in the 1920s.

Invariably their curiosity leads to ask, “What happened?” How could the island sustain a vibrant and livable vacation community one hundred years ago but today exist as an uninhabited densely forested nature preserve? For a 10-year old student, the island has become a fascinating study in sustainability. To them just the name, Apple Island, conjures up a whimsical image. In order to study what happened, we pose an over-arching question, “What would you need to live on Apple Island?” The question returns answers that include water, shelter, heat, fire, food, transportation, etc. To discuss sustainability in an historical context we introduce the four life styles that have existed in the Township’s history and on the island as well. On the ensuing hike around the island we explore how each of those life styles addressed their sustainability requirements.

Our Township, West Bloomfield, has witnessed four distinct life styles during its recorded history. The first inhabitants were American Indians arriving as early as 11,000 years ago. They were drawn here by the prevalence of water; lakes as well as rivers. The American Indians were displaced by European farmers arriving in great numbers after the completion of the Erie Canal. This transition was facilitated by the outcome of the French and Indian War that played such a significant role in the history of Michigan. With improved methods of public transportation, the draw of water made the Township a preferred destination for vacationers. Some lakefront property was purchased or converted into hotels, inns, cabins and resorts. As public transportation was replaced by the personal automobile, people were able to live permanently in the Township and commute to their work in distant cities like Detroit. The transition from farmers and vacationers lead to our current style that we call suburbanites.

Each of these life styles existed on Apple Island in some form and solved their sustainability requirements utilizing different methods. Let’s look at water for example. The American Indians undoubtedly got their water from the surrounding lakes. Traces on the island teach us that early farmers built stone-walled wells to retrieve ground water. The vacationing Campbell Family built a cistern in the late 1800s to catch rain water running off the roof of their island home. Today, runoff from fertilized lawns and other forms of contamination make the lake water unusable for drinking purposes. We suburbanites rely on water bottles carried on and off the island for this valuable resource.

Heat and light offer another interesting requirement to study. Fire obviously served as a solution for the early inhabitants. Artifacts have been uncovered that suggest later residents used oil or kerosene lamps for light. One island resident, Willis Ward, added an electric generator house in the 1920s to power his two-story brick home on the island. Today, local ordinances eliminate fire as an option. For our annual Michigan Week public tours of the island we recently had a Fur Trade-era reenactor camped on the island. Special permission was required from three governing entities, the city, fire department and school district, to have a small fire just for “effect.”

A final example of our island sustainability discussion is transportation. Apple Island is located at the convergence of three river watersheds; the Clinton, Huron, and River Rouge. American Indians traveling by birch bark and dugout canoes were naturally brought to this location. The vacationing Campbell Family and friends required more hauling capacity. Island homes were furnished with sofas, organs and imported Italian wallpaper. Food requirements exceeded the island’s ability to support multiple vacationing families. A scow, large enough to carry a horse-drawn wagon, was acquired to haul building materials, groceries and serve as a swim platform. Vacationers staying at local hotels and cabins required a more “cushy” excursion and Orchard Lake saw as many as three steam boats for lake tours. Today, visiting 2nd-graders arrive in district-owned pontoon boats. Prudence and insurance risk require trained boat drivers, a parent for every three of four students, everyone to wear life jackets en route and remain seated until docked.

Students depart the island with a better understanding that our life style choices provide a level of health and safety that may not have been a concern in an earlier time. They see that the term sustainability meant different things to residents in earlier time periods. To the casual eye the island appears to be just another densely forested plot of land. For the 2nd-grade students of the West Bloomfield School District, they learn to see traces left from earlier residents and the significance of those traces to our understanding of sustainability.

The Greater West Bloomfield Historical Society (GWBHS) is a non-profit, tax-exempt organization. It serves the Michigan communities of Keego Harbor, Orchard Lake, Sylvan Lake and West Bloomfield. The Society's goal is to provide a vital museum to familiarize residents with our area's history.
For more information, please visit www.gwbhs.com
Posted by Buzz Brown at 7:29 PM No comments: