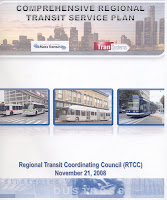 In November 2008, The Regional Transit Coordinating Council (RTCC) published a Comprehensive Regional Transit Service Plan. This plan is a twenty-five year roadmap for improving existing transit services for Southeast Michigan and recommending the construction of a multimodal network of transit services. It has been recognized that this plan has not received widespread support particularly from local units of government. Ironically many of these same local units of government are desperately trying to develop urbanized town centers to capitalize on the trend for this life style. It will be argued that the promotion of European-style Neighborhood Transit Centers (ESTC) is a way to engage local units of government in the regional plan, facilitate their interest in developing town centers, and encourage adoption of transit oriented development projects (TOD). The premise of this proposal is to acknowledge communities that invest in public transit and transit center plans by including the community in the regional transit plan.
Defining a European-style Neighborhood Transit Center
A European-style Neighborhood Transit Center (ESTC) is an American version of small transit centers common in countries historically transit friendly. The ESCT is a single structure identified by its small public space for waiting and socializing. For sustainability, the ESTC is funded through commercial and, in some cases, residential leases. ESTCs are located in areas that typically cannot support a high-volume mass transit facility so prevalent in the RTCC plan.
A European-style Neighborhood Transit Center (ESTC) can stimulate the development of a fledgling town center (like the City of Keego Harbor) or a drivable-suburban community wishing to develop a town center (like the intersection of Maple Road and Orchard Lake Road in West Bloomfield Township).
What’s in it for me?
Although the RTCC regional plan addresses the expansion of existing transit services, much of the plan focuses on dedicated transit solutions including light rail (LRT) and bus rapid transit (BRT). Due to the infrastructure expense of these solutions and the requirement of significant existing ridership volumes, only key locations have been included in the printed maps. For this reason, local units of government with the “what’s in it for me” attitude can arguably fail to see any benefit to them.
Local Units of Government

Most communities in Southeast Michigan have been built on the drivable suburban model that requires an automobile for even the most trivial of trips. A good example is the City of Rochester Hills, Michigan. The community is predominantly made up of cul-de-sac neighborhoods with few sidewalks, major roads nearly impossible to cross as a pedestrian, and the community has opted-out of the public transportation system. The type of family for whom this model was built is no longer the American norm.  In a recent Oakland County glossy promotional magazine the City of Rochester Hills depicted itself as a quaint, walkable town center life style.  The ESTC can certainly help communities turn these isolated islands of walkability into connected centers for a more urban life style that the community is trying to achieve.
Public Space
The ESTC’s public space can be as small as 1,000 – 2,000 square feet immediately adjacent and connected to commercial tenants. The public space can serve as a waiting area for public transit as well as a stop for private coaches to casinos, tours and the airport. Digital display signage of real-time transit information should be included in the public space as well as self-serve kiosks for ticket purchases. The design of the ESTC should celebrate the heritage of the community in which it is located by utilizing the public space for display of the community’s artifacts.
Tenants
The choice of tenant needs to create a win-win relationship between the public space and commercial space. Commercial tenants will need to be selected on their interest in having access to the public space and the traffic, both pedestrian and vehicle, that TODs tend to generate. In addition, tenants need an interest in the extended hours that transit centers need to operate. An emphasis must be placed on restaurants (like Denny’s Classic Diner) and coffee shops (like Tim Horton’s) that benefit from the additional public space and extended hours.
Another tenant opportunity is the local community post office. The US Post Office has gone through a transition that emphasizes self-service kiosks for selling mailing supplies and access to post office boxes during extended hours outside the normal operating ours of the office itself. The ESTC public space satisfies these requirements and positions the post office in a traditional town center public space environment. Additionally, small community bank tenants would also benefit from the extended hours of public space for ATM machines and night deposit boxes.
Conclusion
It has been proposed that the Metro-Detroit area could support as many as 17 walkable urban “places” but currently supports four (Downtown, Midtown, Royal Oak and Birmingham). The ESTC can become the stimulus for deciding where those additional urban places can germinate. Local communities that develop neighborhood transit centers should be rewarded with inclusion in the regional plan and offered support services for development of TOD plans. The RTCC should work with local units of government to promote the benefit of ESTCs and facilitate the development of these TOD plans.
bus mass transportation michigan