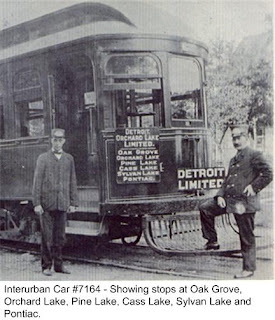 With the sudden increase in the cost of fuel, there is a growing call for some form of a light rail public transportation system in Southeastern Michigan. History has shown that the development of a public transportation system dictates the value of real property and influences one’s choice in residential locations. Ironically the very light rail system we are trying to develop once existed here and directly influenced the people that chose to call the Township their home. To explain the role that transportation has had on our township, I have provided some excerpts from text provided by GWBHS member Catherine Cangany during our recent Apple Island tour weekend.

Native Americans
West Bloomfield’s first inhabitants arrived here 11,000 years ago. The Native Americans who lived here were drawn to the area for the same reasons we are: the lakes, which provided plenty of food and water, but also easy transportation. The watersheds of the three major rivers in our area—the Clinton, the Rouge, and the Huron—converge just southwest of the southern shore of Orchard Lake. This means that the land that would become West Bloomfield Township—and especially Apple Island—made for an easy and well-known meeting spot for travelers on any of the three river systems to find. To navigate the local rivers and lakes, the Native Americans in our area used two forms of canoes: dug-out canoes (made from a single tree trunk, like the one in our museum) and birch-bark canoes (made from a white-cedar frame covered over with birch bark).
Farmers
By the 1820s, the Native Americans living in our area had been pushed westward by the second group of people to call West Bloomfield home: white farmers. Many of these farmers came from the east coast, and they traveled via the Erie Canal, which opened in 1825. The canal, which stretches from Albany to Buffalo, New York, made it much easier to reach Michigan. As a result, West Bloomfield’s population boomed in the decades after 1825. In this era, canoes were replaced by horses and wagons as more and more roads were built. It took over five hours to travel between West Bloomfield and Detroit on horseback—even longer in a wagon or carriage. The roads were muddy and bumpy, and very uncomfortable to travel on. This all changed in 1844, with the completion of the Detroit and Pontiac Railroad line. It slashed the trip between West Bloomfield and Detroit to just one hour. In time, other railroad lines and electric streetcar lines made this area even more accessible.
Vacationers
This transformation in transportation gave rise to our township’s third group of inhabitants: vacationers. Because it was very easy for residents of Detroit, Chicago, St. Louis, and Cleveland to reach West Bloomfield, in the early 1900s, our community became an ideal place to spend the whole summer. With the advent and increasing affordability of the automobile in the 1920s and 1930s, a new type of vacationer came to West Bloomfield: the day-tripper. Instead of spending the whole summer here, tourists would come for a quick trip, often only for a day. To accommodate all the short-term residents, West Bloomfield entrepreneurs built hotels, cottages, camping grounds, and cabins, and West Bloomfield became a resort town.
Suburbanites
As automobiles gained horsepower and Michigan gained a system of highways, it became possible for more people who worked in Detroit to live in West Bloomfield. These innovations brought about the fourth group of residents here: us: suburbanites.
About the GWBHS
The Greater West Bloomfield Historical Society (GWBHS) is a non-profit, tax-exempt organization. It serves the Michigan communities of Keego Harbor, Orchard Lake, Sylvan Lake and West Bloomfield. The Society's goal is to provide a vital museum to familiarize residents with our area's history. For more information, please visit www.gwbhs.com
history michigan native american transportation